Home » A Tax to Support ‘Made in the USA’

When Alan Auerbach last worked at length on Capitol Hill, as Deputy Chief of Staff of the U.S. Joint Committee on Taxation in the early 1990s, Washington was a very different place, with no “alternative facts,” Bernie bros, Tea Partiers, or Russian hacking allegations swirling in the muggy air. That Auerbach returned to a far more fractious D.C. earlier this year is a testament to his determination for advocating what Politico has termed “the most controversial proposal in tax policy,” the destination-based cash flow tax.

This proposed tax is intended to fix a key issue related to current corporate income taxation, namely that many large companies move jobs overseas and stash profits in tax havens. Companies like Apple have notoriously taken advantage of tax loopholes with few consequences, at least until the European Union levied a $14.5 billion penalty on the tech giant last year. Because of the economic boost that a large corporation can bring, many nations engage in what Auerbach described in one paper as a “race to the bottom,” slashing their corporate tax rates to woo corporations away from other countries.

In an interview, Auerbach, who is Robert D. Burch Professor of Economics and Law at UC Berkeley and Director of the Robert D. Burch Center for Tax Policy and Public Finance, explained that many of these countries do this at the same time that they increase their consumption taxes, or value-added tax (VAT). Yet that is not currently an option here in the U.S., which has no VAT. Auerbach’s proposal, according to an article he authored last month published by the Centre for Economic Policy Research, would begin “relieving tax on export revenues and imposing tax on imports, in precisely the same manner as is done under existing value-added taxes (VATs).”

“The point of this proposal is to shift toward taxing based on where consumption occurs, and to lessen the tax based on the income that companies produce in a particular place,” Auerbach explained in an interview. That would mean “taking away any impediment the tax system would impose” to production in the United States.

Corporate income taxation matters to the average Joe because corporations’ decisions about where to locate production can determine job availability domestically—and the tax dollars these companies aren’t paying have to come out of other people’s pockets. “I don’t think we’re going to start making T-shirts in the U.S. instead of in China or Thailand,” Auerbach says. “[The proposal] isn’t going to make companies that are producing in very low-wage countries for many reasons simply reverse decades-long decisions to move production out of the U.S.” Instead, he says, the proposal’s impact would be highest in industries reliant on high-productivity, high-skill labor (e.g., automobile manufacturing).

Some House GOP members have reacted favorably to the proposal and sought to  incorporate it into corporate tax policy changes, but it didn’t win over everyone. “The strongest organized opposition came from the retail industry,” says Auerbach. “They were convinced that this was going to lead to a huge increase in domestic prices of their products. Many retail companies import a lot of what they sell, and they thought the tax imposed at the border would drive up their costs, hurt their profits, and be bad for their customers. That’s not what the economic analysis suggests, but it’s hard to make subtle points about economic analysis in that context.”

Auerbach says that part of the challenge of implementing the destination-based cash flow tax lies in explaining how it functions. “In order to explain to non-economists how this works, you have to leave a lot of things out,” he says. “At the political level it was just very hard. There were people who liked it—or were against it—for what you might say the wrong reasons, because they didn’t fully understand it. There were opponents who would have been much happier just with a tax cut, and that’s sort of more where we ended up.” (The tax plan that House Republicans recently proposed would significantly lower the corporate tax rate.)

Corporate taxation has been Auerbach’s focus for several decades; he wrote his PhD dissertation on the subject in the late 1970s. But his work has never been restricted to the ivory tower. “As many academics who work on applied topics do, I’ve been testifying on tax reform, writing policy papers, and talking to people in Washington about this for years,” he says. “But it was somewhat unexpected to have this thing go live.”

For Auerbach, “going live” meant immersing himself in the political side of advocating for the destination-based cash flow tax, “talking to people in Washington who were putting this together, people out in industry, and responding frequently on the radio and on television to opponents.” He faced one high-profile opponent, Bay Area Congressman Ro Khanna, on CNBC’s “Power Lunch” in early 2017. Rep. Khanna called the proposal “reverse redistribution” that would “basically be a tax on middle-class Americans and working families.” In that clip, Auerbach’s unequivocal (though characteristically genteel) retort was “[Khanna’s] welcome in Berkeley anytime, so that I can go through with him why what he just said is not correct.”

To advocate for his policy, Auerbach has written pieces for Brookings, the New York Times, and numerous other organizations, and he has learned to work efficiently to make headway in Washington, where he says “things happen very quickly. Ideas come and go on a weekly basis. They have an arc: they’re very popular and then they’re opposed and then they die away. The next idea comes up the next week. So you can’t say ‘I’ll get back to you next week’ on something.”

From his myriad writings and media appearances, a portrait of Auerbach emerges as someone with a willingness to jump into the ring, but with the temperament of an academic, not a politician. He cites the suddenness of the earlier GOP tax proposal as one of the reasons for its failure; the “House Better Way” plan of June 2016 was unexpectedly launched into the limelight after Trump’s win. “It might have gone better if it had been a more gradual process,” Auerbach says. “Historically, the tax reform process takes a long time, and this proposal was not really taken very seriously until all of a sudden it was taken very seriously. That made it more difficult to acquaint people in the political process with it.”

Indeed, GOP lawmakers struck the destination-based cash flow tax from their current proposal after political pressure, citing numerous “unknowns” (CNBC). So is Auerbach hopeful for the current wave of tax reform? “Given the way the current process is going right now, I’m not optimistic that the outcome, if it passes, is going to be very good,” Auerbach says. “They’re trying to make it happen very quickly, and this is complicated. When you take something very complicated and try to make it happen quickly, there’s a good chance that you’re going to mess up. So I’ve been hoping that maybe they’re not successful in changing things immediately so that they have a longer horizon for thinking. And then, of course, I hope to push this again.”

UC Berkeley researchers are invited to submit proposals for a series of digital monographs that Social Science Matrix will be publishing in collaboration the University of California Press (UC Press).

END_OF_DOCUMENT_TOKEN_TO_BE_REPLACED 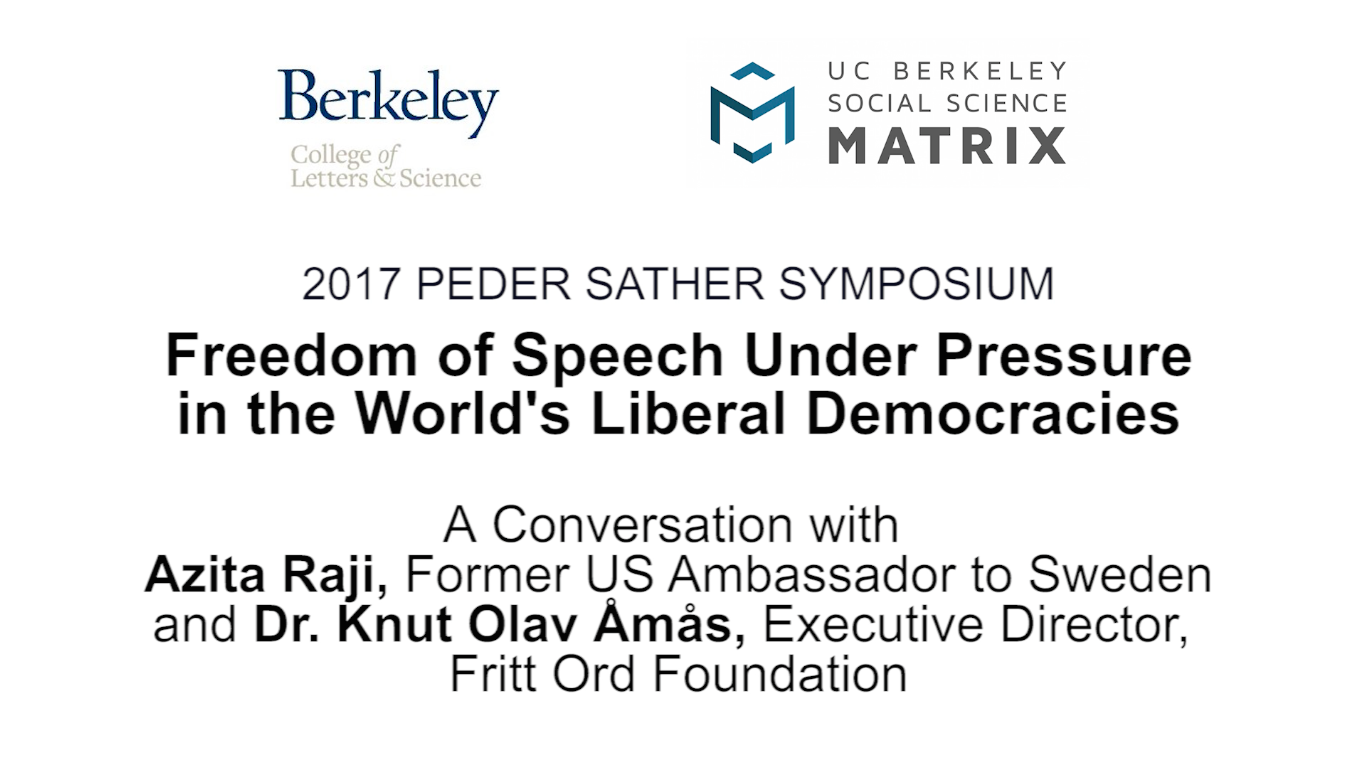 Matrix was honored to host the 2017 Peder Sather Symposium, which focused on the theme, "Freedom of Speech Under Pressure in the World’s Liberal Democracies." Featured speakers include Azita Raji, Former US Ambassador to Sweden, and Dr. Knut Olav Åmås, Executive Director, Fritt Ord Foundation.