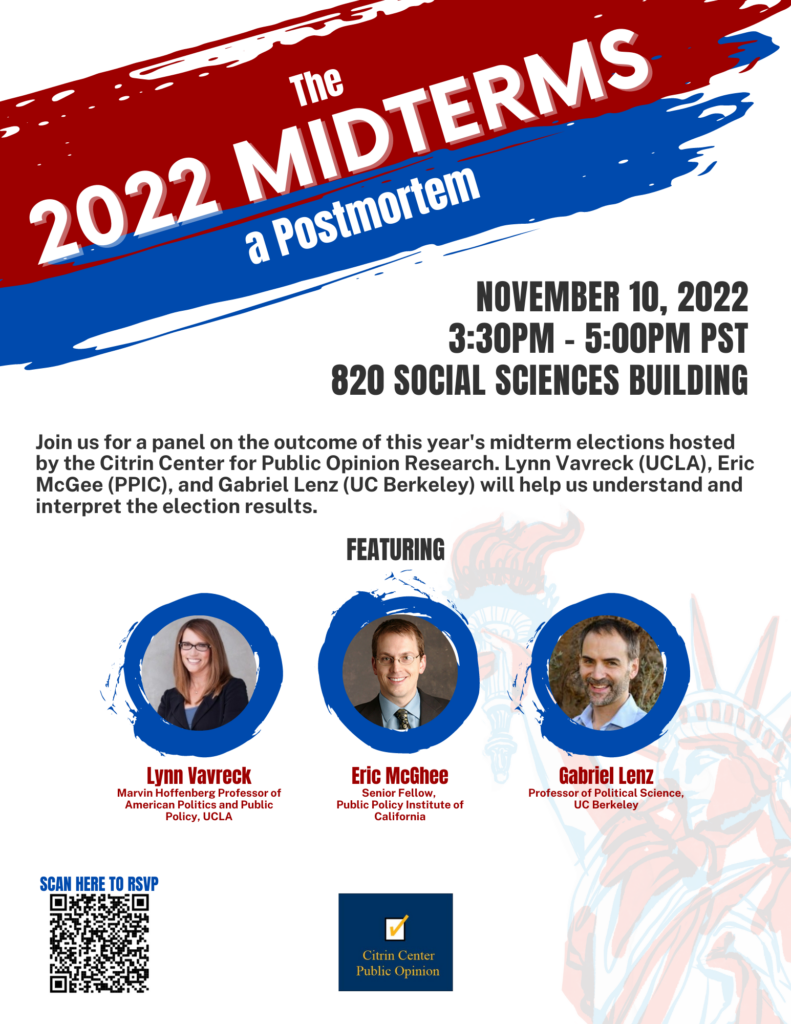 Join us for a panel on the outcome of this year’s midterm elections, hosted by the Citrin Center for Public Opinion Research. Panelists Lynn Vavreck, Marvin Hoffenberg Professor of American Politics and Public Policy at UCLA, Eric McGee, Senior Fellow at the Public Policy Institute of California, and Gabriel Lenz, Professor of Political Science at UC Berkeley, will help us understand and interpret the election results.

Lynn Vavreck is the Marvin Hoffenberg Professor of American Politics and Public Policy at UCLA and a contributor to The Upshot at The New York Times.  She teaches courses and writes about campaigns, elections, and public opinion. She is a member of the American Academy of Arts and Sciences and a winner of the Andrew F. Carnegie Prize in the Humanities and Social Sciences. In 2014 she hosted Hillary Clinton at UCLA’s Luskin Lecture on Thought Leadership.

Eric McGhee is a senior fellow at PPIC, where he focuses on elections, legislative behavior, political reform, and surveys and polling. His research on elections and electoral reform has appeared in numerous academic journals, and his work has been profiled on National Public Radio, the Washington Post, the New York Times, and The Economist. He is the creator of the “efficiency gap”—a widely used measure of gerrymandering—and coauthor of a legal test based on the measure that has been presented before the US Supreme Court in recent high-profile litigation. He is an occasional contributor to the Washington Post’s Monkey Cage blog on politics. Before joining PPIC, he was assistant professor of political science at the University of Oregon and served as a congressional fellow through the American Political Science Association. He holds a PhD in political science from the University of California, Berkeley.

Gabriel Lenz is a professor of political science at the University of California, Berkeley. He studies democratic accountability, focusing on how to help voters hold their politicians accountable and how governments can protect people from violence and incarceration. He has published a book on elections with the University of Chicago Press and has published articles in the American Political Science Review, American Journal of Political Science, and Journal of Politics, Political Analysis, and other journals.