Home » Events » Matrix on Point: The Rights and Lives of Non-Citizens 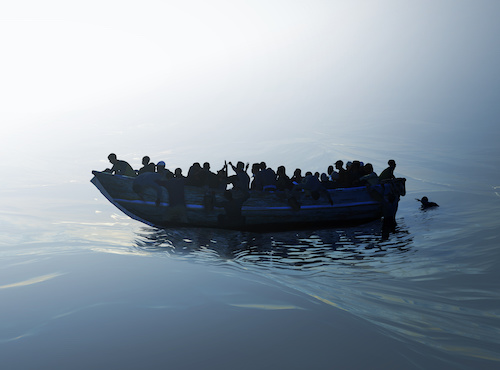 Please join us for a “Matrix on Point” panel discussion on the Rights and Lives of Non-Citizens. This timely panel will consider forms of non-citizenship and marginalization around the world, with a special focus on refugees, stateless people, and undocumented migrants.

This event is presented as part of the Matrix on Point discussion series, which promotes focused, cross-disciplinary conversations on today’s most pressing contemporary issues. Offering opportunities for scholarly exchange and interaction, each Matrix On Point features the perspectives of leading scholars and specialists from different disciplines, followed by an open conversation. These thought-provoking events are free and open to the public.

The event will be moderated by Irene Bloemraad, of the Sociology Department at UC Berkeley. This event is co-sponsored by Social Science Matrix and the Berkeley Interdisciplinary Migration Initiative (BIMI).

Noora Lori: Noora Lori is an Assistant Professor of International Relations at the Pardee School of Global Studies at Boston University. Her research broadly focuses on citizenship, migration, and institutions. She studies citizenship, statelessness, temporary migration schemes and racial hierarchies in comparative perspective. Regionally, her work examines the shifting population movements accompanying state formation in the Persian Gulf, expanding the study of Middle East politics to include historic and new connections with East Africa and the Indian subcontinent. Lori’s book, Offshore Citizens: Permanent “Temporary” Status in the Gulf (Cambridge University Press 2019), received the best book prize from the Migration and Citizenship section of the American Political Science Association (2020), the Distinguished Book Award from the Ethnicity, Nationalism, and Migration Studies section of the International Studies Association (2021), and the Best Book in MENA (Middle East and North Africa) Politics from the APSA-MENA Politics section of the American Political Science Association. She has published in the Journal of Global Security Studies, International Journal of Middle East Studies, Perspectives on Politics, Oxford Handbook on Citizenship, The Shifting Border, the Asian and Pacific Migration Journal, and the Journal of Politics & Society among other journals and edited volumes.  Her research has been funded by the ACLS/Mellon Foundation, the ZEIT-Stiftung “Settling into Motion” Fellowship, the Hariri Institute for Computing and Computer Engineering (BU), the Initiative on Cities (BU) (2016; 2019), as well as other grants. Professor Lori is the Founding Director of the Pardee School Initiative on Forced Migration and Human Trafficking, which she co-directs with Professor Schilde. She serves on the steering committee of the Inter-University Committee for International Migration.

Itamar Mann: Dr. Mann’s research and teaching interests are in international law (especially at the intersections with refugee and migration law), environmental law, and legal theory. Alongside an introductory course on public international law, and one on jurisprudence, he teaches electives on human rights and environmental law. In 2021 attorney Sharon Madel Artzy of FBC & co and Dr. Mann started a workshop on law and climate change, first of its kind in Israel. A large part of Dr. Mann’s research focuses on legal, political, and ethical questions that arise from largescale migration. His book, Humanity at Sea: Maritime Migration and the Foundations of International Law, came out with Cambridge University Press in 2016. His articles appeared in leading journals including the European Journal of International Law, the Texas Law Review, and more. He also works as a legal advisor to the international human rights organization GLAN (the Global Legal Action Network). Prior to coming to Haifa Dr. Mann was a National Security Law Fellow at Georgetown Law Centre. He holds JSD and LLM degrees from Yale Law School, and an LLB degree from Tel Aviv University.

Cecilia Menjívar: Professor Cecilia Menjívar holds the Dorothy L. Meier Social Equities Chair and is Professor of Sociology at UCLA. She specializes in immigration, gender, family dynamics, social networks, and broad conceptualizations of violence. Her research explores the impact of immigration laws and enforcement on immigrants and the effects of multisided violence on individuals, especially Central American immigrants. She also focuses on the political, state, and judicial failures that sustain gender-based violence in Central America. Prominent books she has authored or edited include, “Fragmented Ties: Salvadoran Immigrant Networks in America,” “Enduring Violence: Ladina Women’s Lives in Guatemala,”  “Immigrant Families,” “Constructing Immigrant ‘Illegality’: Critiques, Experiences, and Responses,” and “The Oxford Handbook of Immigration Crises.” Professor Menjívar has co-authored several amicus briefs regarding the effects of detention, asylum based on gender-based violence, and the one on the DACA lawsuit. She is both, a John S Guggenheim Fellow and an Andrew Carnegie Fellow. She has served as Vice-President of the American Sociological Association and was elected President in 2020.

Serena Parekh: Serena Parekh is a Professor of Philosophy at Northeastern University in Boston, where she is the director of the Politics, Philosophy, and Economics Program and co-editor of the journal, Feminist Philosophy Quarterly. She is the author of three books, including her most recent book, No Refuge: Ethics and the Global Refugee Crisis (Oxford 2020), which one the North American Society for Social Philosophy Book Award. Other books include, Refugees and the Ethics of Forced Displacement (Routledge in 2017) and Hannah Arendt and the Challenge of Modernity: A Phenomenology of Human Rights (Routledge 2008), which was translated into Chinese. Her primary philosophical interests are in social and political philosophy, feminist theory, and continental philosophy. She has also published numerous articles on social and political philosophy in Hypatia, Philosophy and Social Criticism, and Human Rights Quarterly.

Irene Bloemraad (Moderator): Irene Bloemraad is the founding director of Berkeley’s Interdisciplinary Migration Initiative (BIMI) and the Class of 1951 Professor of Sociology at the University of California, Berkeley. Bloemraad studies how migrants become incorporated into the political communities where they live, and the consequences of migration for politics and understandings of membership. She has investigated why immigrants become citizens, whether immigrant communities face inequities in building and accessing community-based organizations, and how non-immigrants’ attitudes about immigration policy shifts depending on whether we talk about human rights, citizenship, family unity, or appeals to national values. Her research has been published in academic journals spanning sociology, political science, history, and ethnic/ migration studies, and she has authored or co-edited five books, including The Oxford Handbook of Citizenship (2017), Rallying for Immigrant Rights (2011) and Becoming a Citizen (2006). The International Migration Review, the top North American migration journal, named Bloemraad its “Featured Scholar of 2018.” In 2014- 15, she served as a member of the U.S. National Academy of Sciences panel reporting on the integration of immigrants into U.S. society. Bloemraad’s research spans North America and Western Europe. She has a special interest in comparative U.S.-Canada analysis. She also holds the Thomas Garden Barnes Chair of Canadian Studies at UC-Berkeley and co-directs the Toronto-based Canadian Institute for Advanced Research’s “Boundaries, Membership and Belonging” program. A proud product of the Saskatoon public school system, she received her B.A. (Political Science) and M.A. (Sociology) from McGill University and her Ph.D. (Sociology) from Harvard University.