Home » Events » Authors Meet Critics: How the Clinic Made Gender 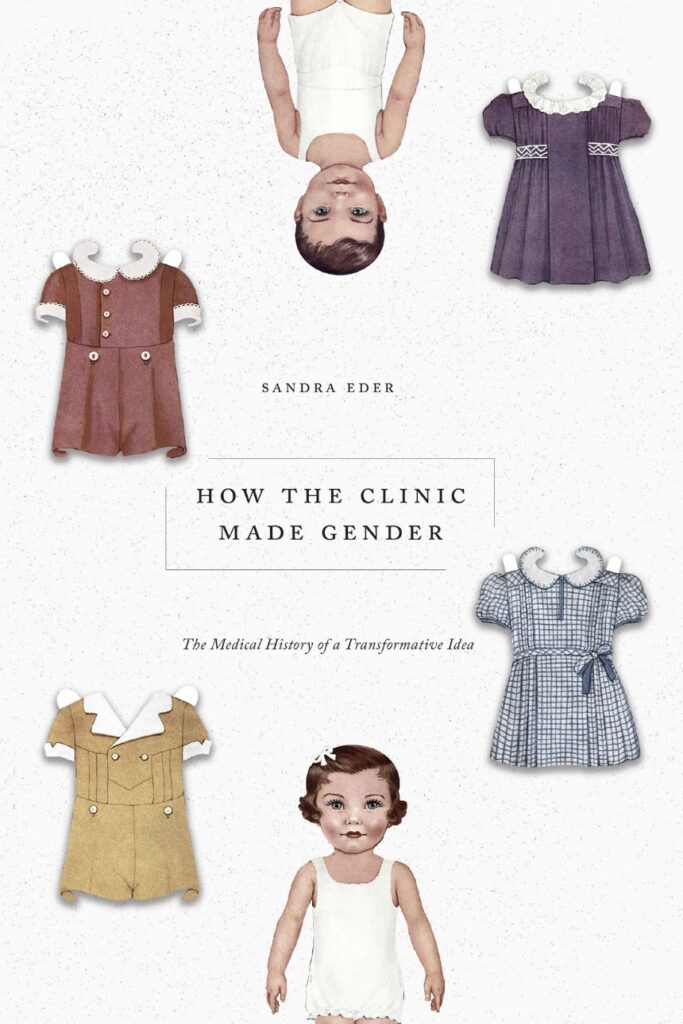 Register to join us on November 9 for an “Authors Meet Critics” panel on How the Clinic Made Gender: The Medical History of a Transformative Idea (University of Chicago Press, 2022) by Sandra Eder, Associate Professor of History at UC Berkeley. Eder will be joined in conversation by Laura Nelson, Associate Professor of Gender and Women’s Studies at UC Berkeley, and Danya Lagos, Assistant Professor in the UC Berkeley Department of Sociology. The panel will be moderated by Catherine Ceniza Choy, Professor of Ethnic Studies and Associate Dean of Diversity, Equity, Inclusion, Justice, and Belonging in the Division of Computing, Data Science, and Society.

For 30% off, purchase from the University of Chicago Press website and enter code UCPNEW at checkout.

Today, a world without “gender” is hard to imagine. Gender is at the center of contentious political and social debates, shapes policy decisions, and informs our everyday lives. Its formulation, however, is lesser known: gender was first used in clinical practice.

Eder shows how the concept of gender transformed from a pragmatic tool in the sex assignment of children with intersex traits in the 1950s to an essential category in clinics for transgender individuals in the 1960s. Following gender outside the clinic, she reconstructs the variable ways feminists integrated gender into their theories and practices in the 1970s. The process by which ideas about gender became medicalized, enforced, and popularized was messy, and the route by which gender came to be understood and applied through the treatment of patients with intersex traits was fraught and contested.

In historicizing the emergence of the sex/gender binary, Eder reveals the role of medical practice in developing a transformative idea and the interdependence between practice and wider social norms that inform the attitudes of physicians and researchers. She shows that ideas like gender can take on a life of their own and may be used to question the normative perceptions they were based on. Illuminating and deeply researched, the book closes a notable gap in the history of gender and will inspire current debates on the relationship between social norms and medical practice.

Sandra Eder is Associate Professor in the UC Berkeley Department of History. Her research focuses on the emergence of modern ideas about the self and formulations of identity through scientific knowledge production and in medical practice, the interplay of gender, sexuality, identity, ethnicity, and medicine, patient records and clinical practices, and gender and sexuality in popular culture. In addition to How the Clinic Made Gender: The Medical History of a Transformative Idea, Eder was co-editor of  Pink and Blue: Gender, Culture, and the Health of Children (Rutgers University Press, 2021).

Danya Lagos, Assistant Professor of Sociology at UC Berkeley, specializes in how gender is changing in the 21st century. She is particularly interested in the social demography of LGBTQ populations. Her work has been published in the American Sociological Review, Demography and the Annual Review of Sociology. She received her PhD in sociology from the University of Chicago in April of 2019. During the 2019-2020 academic year, she was an NICHD Postdoctoral Fellow at the University of Texas at Austin’s Population Research Center.

Laura Nelson is Associate Professor in the UC Berkeley Department of Gender and Women’s Studies. She was trained as a cultural anthropologist, and she has focused her research on issues of gender in the context of cultural change. Her earlier interest in gender and economic inequality has led her to questions of how gendering interacts with practice in domains of health and caring.

Catherine Ceniza Choy (moderator) is Professor of Ethnic Studies and Associate Dean of Diversity, Equity, Inclusion, Justice, and Belonging in the Division of Computing, Data Science, and Society. Her most recent book is Asian American Histories of the United States (Beacon Press, 2022). It features the themes of anti-Asian hate and violence, erasure of Asian American history, and Asian American resistance to what has been omitted in a nearly 200 year history of Asian migration, labor, and community formation in the US.


This is a hybrid event. A Zoom link will be sent to registrants prior to the event. For in-person attendees, Matrix is located on the eighth floor of the Social Sciences Building (formerly Barrows Hall), on the southern edge of the UC Berkeley campus. The elevator to our entrance is located on the east end of the building. You can alternately take an elevator to the seventh floor and come up the stairs. Please note that in-person attendees will be required to comply with any applicable campus COVID-19 protocols.