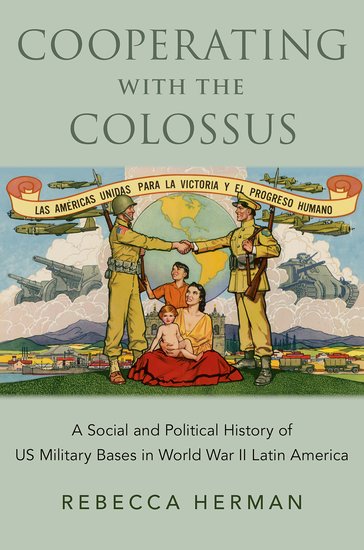 Please join us on March 6, 2023 from 4pm-5:30pm for an Authors Meet Critics book panel focused on Cooperating with the Colossus: A Social and Political History of US Military Bases in World War II Latin America, by Rebecca Herman, Assistant Professor of History at UC Berkeley.

Professor Herman will be joined in conversation by Julio Moreno, Professor of History at the University of San Francisco, and José Juan Pérez Meléndez, Assistant Professor in Latin American and Caribbean History at UC Davis, and a Bridging the Divides Fellow at the Center for Puerto Rican Studies in Hunter College. Elena Schneider, Associate Professor in the UC Berkeley Department of History, will moderate.

This panel will be co-sponsored by the UC Berkeley Department of History.

During the Second World War, the United States built over two hundred defense installations on sovereign soil in Latin America in the name of cooperation in hemisphere defense. Predictably, it proved to be a fraught affair. Despite widespread acclaim for Pan-American unity with the Allied cause, defense construction incited local conflicts that belied the wartime rhetoric of fraternity and equality.

Cooperating with the Colossus reconstructs the history of US basing in World War II Latin America, from the elegant chambers of the American foreign ministries to the cantinas, courtrooms, plazas, and brothels surrounding US defense sites. Foregrounding the wartime experiences of Brazil, Cuba, and Panama, the book considers how Latin American leaders and diplomats used basing rights as bargaining chips to advance their nation-building agendas with US resources, while limiting overreach by the “Colossus of the North” as best they could.

Yet conflicts on the ground over labor rights, discrimination, sex, and criminal jurisdiction routinely threatened the peace. Steeped in conflict, the story of wartime basing certainly departs from the celebratory triumphalism commonly associated with this period in US-Latin American relations, but this book does not wholly upend the conventional account of wartime cooperation. Rather, the history of basing distills a central tension that has infused regional affairs since a wave of independence movements first transformed the Americas into a society of nations: national sovereignty and international cooperation may seem like harmonious concepts in principle, but they are difficult to reconcile in practice.

Drawing on archival research in five countries, Cooperating with the Colossus is a revealing history told at the local, national, and international levels of how World War II transformed power and politics in the Americas in enduring ways.

Rebecca Herman is an Assistant Professor in UC Berkeley’s Department of History. Her work explores twentieth-century Latin American social and political history in a global context, probing the intersections between grand narratives and local history. Her book, Cooperating with the Colossus, reconstructs a contentious U.S. military basing project advanced in Latin America during World War II under the banner of inter-American cooperation in hemisphere defense.

Julio Moreno is a Professor of History at the University of San Francisco. He is the author of Yankee Don’t go Home! Mexican Nationalism, American Business Culture, and the Shaping of Modern Mexico, 1920-1950. His other publications are on U.S.-Latin American relations during the Cold War. His research and publications center on the intersection of U.S. business and diplomacy through the subfields of diplomatic, business, and cultural history. He is currently writing a book on the history of Coca-Cola in Latin America.

osé Juan Pérez Meléndez is an Assistant Professor in Latin American and Caribbean history at the University of California, Davis, and a Bridging the Divides Fellow at the Center for Puerto Rican Studies in Hunter College. His work is concerned with nineteenth-century colonization dynamics in Brazil in global perspective, and with the international dilemmas of decolonization in the twentieth-century Caribbean. His forthcoming book, Peopling for Profit, charts the co-production of migrations and regulatory powers in the Brazilian Empire with a special focus on the driving force of oligarchic business dynamics.

Elena Schneider (moderator) is Associate Professor of History at UC Berkeley. She is a a historian of Latin America, the Caribbean, and the Atlantic World. Her research focuses on Cuba and the Caribbean, comparative colonialism and slavery, and the Black Atlantic. Methodologically, she seeks to write history that moves across regional, imperial, and national boundaries, integrating diverse stories normally told separately. She is also committed to the practice of writing history “from below” and the challenging archival work that makes reconstructing the experiences of historically marginalized peoples possible. Her book, The Occupation of Havana, is a longue durée history of the causes, central dynamics, and enduring consequences of a crucial incident of imperial warfare, the British invasion, occupation, and return of Havana (1762-3) during the final stages of the Seven Years’ War.