The Social Science Matrix "Authors Meet Critics" book series features lively discussions about recently published books authored by social scientists at UC Berkeley. For each event, the author discusses the key arguments of their book with fellow scholars. These events are free and open to the public.

Authors Meet Critics: "Redistributing the Poor: Jails, Hospitals, and the Crisis of Law and Fiscal Austerity" 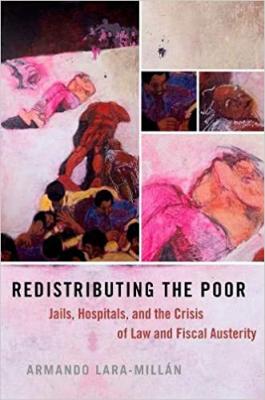 Please join us on April 19, 2021 for an "Authors Meet Critics" book talk featuring Redistributing the Poor: Jails, Hospitals, and the Crisis of Law and Fiscal Austerity, by Armando Lara-Millán, Assistant Professor in the UC Berkeley Department of Sociology. Whenever the topic of large jails and public hospitals in urban America is raised, a single idea comes to mind. It is widely believed that because we as a society have disinvested from public health, the sick and poor now find themselves within the purview of criminal justice institutions. In Redistributing the Poor, ethnographer and historical sociologist Armando Lara-Millán takes us into the day-to-day operations of running the largest hospital and jail system in the world and argues that such received wisdom is a drastic mischaracterization of the way that states govern urban poverty at the turn of the 21st century. Rather than focus on our underinvestment of health and overinvestment of criminal justice, his idea of "redistributing the poor" draws attention to how state agencies circulate people between different institutional spaces in such a way that generates revenue for some agencies, cuts costs for others, and projects illusions that services have been legally rendered. By centering the state's use of redistribution, Lara-Millán shows how certain forms of social suffering — the premature death of mainly poor, people of color — are not a result of the state's failure to act, but instead the necessary outcome of so-called successful policy. Panelists include: Angèle Christin, Assistant Professor in the Department of Communication and affiliated faculty in the Sociology Department and Program in Science, Technology, and Society at Stanford University; and Jonathan Simon, Professor at Berkeley Law. This event is co-sponsored by the Center for Study of Law and Society (CSLS). REGISTER

Recorded on March 10, 2021, this Authors Meet Critics panel focused on Scammers Yard: The Crime of Black Repair in Jamaica, by Jovan Scott Lewis, Assistant Professor of Geography at UC Berkeley. Scammer's Yard tells the story of three young and poor men striving to make a living in Montego Bay, where call centers and tourism are the two main industries in the struggling economy. Lewis describes how these young men, seeking to overcome inequality and achieve autonomy, come to view crime as a form of liberation. Lewis discussed the book with Deborah Thomas, R. Jean Brownlee Professor of Anthropology at the University of Pennsylvania, and Nadia Ellis, Associate Professor, UC Berkeley Department of English. Video coming soon.

Authors Meet Critics: Bloc by Bloc: How to Build a Global Enterprise for the New Regional Order

In his book, Bloc by Bloc: How to Build a Global Enterprise for the New Regional Order, Steven Weber, a political scientist and professor in the UC Berkeley School of Information, puts forward a compelling new model for global organization that integrates modern developments in technology and governance. In this panel discussion, recorded on February 11, Professor Weber discussed the book with Vinod K. Aggarwal, Professor of Political Science, and Homa Bahrami, Senior Lecturer in the Haas School of Business. AnnaLee Saxenian moderated. Watch the video.

Authors Meet Critics: The Future of Nuclear Waste: What Art and Archaeology Can Tell Us about Securing the World's Most Hazardous Material

Recorded on Nov. 5, 2020, this online "Authors Meet Critics" panel featured Rosemary Joyce, Professor of Anthropology at the University of California, Berkeley, discussing her book, The Future of Nuclear Waste: What Art and Archaeology Can Tell Us about Securing the World's Most Hazardous Material. Professor Joyce was joined in conversation by Cathryn Carson, Professor of History, and Kate O’Neill, Professor in the Department of Environmental Science, Policy, and Management. At the heart of Joyce's book is the question, how can sites of waste disposal be marked to prevent contamination in the future? The United States government addressed this challenge in planning for nuclear waste repositories. Consulting with experts in imagining future scenarios, in language and communication, and in anthropology, the Department of Energy sought to develop plans that would satisfy demands from the Environmental Protection Agency for a marker system that would be effective long into the future. Expert consultants proposed two very different designs: one based on archaeological sites recognized as cultural heritage monuments; the other proposing that certain forms invoke universal feelings. The Department of Energy opted for a design based on archaeological ruins, cited as proof human-made markers could last and communicate warnings for thousands of years. This book explores the common sense assumptions the experts made about their archaeological models, and shows how they are contradicted by what archaeologists understand about these places and things. Watch the video.

Authors Meet Critics: Let them Eat Tweets: How the Right Rules in an Age of Extreme Inequality

Recorded on October 13, 2020, this online panel focused on the book, Let them Eat Tweets: How the Right Rules in an Age of Extreme Inequality, co-authored by Paul Pierson, the John Gross Endowed Chair and Professor of Political Science at UC Berkeley, and Jacob Hacker, Stanley B. Resor Professor and Director of the Institution for Social and Policy Studies at Yale University. This book explores how the modern Republican Party has come to be defined by "plutocratic pluralism," which combines an elite-benefiting economic agenda with populist appeals. Theda Skocpol, the Victor S. Thomas Professor of Government and Sociology at Harvard University, and Christopher Parker, Stuart A. Scheingold Professor of Social Justice and Political Science in the Department of Political Science at the University of Washington, responded as "critics" of the book. Both Skocpol and Parker have authored books on topics directly relevant to today's GOP — including the Tea Party. "I think these are the authors of the two best books on the Tea Party, which I think is critical for understanding how we got to where we are," Pierson said. The panel was moderated by Irene Bloemraad, Class of 1951 Professor of Sociology at UC Berkeley. Watch the video.

Authors Meet Critics: Black in Place: The Spatial Aesthetics of Race in a Post-Chocolate City

On October 7, 2020, Social Science Matrix hosted an online discussion focused on Black in Place: The Spatial Aesthetics of Race in a Post-Chocolate City, a book authored by Brandi Thompson Summers, Assistant Professor of Geography and Global Metropolitan Studies at UC Berkeley. In her book, Summers documents Washington, D.C.’s shift to a “post-chocolate” cosmopolitan metropolis by charting the economic and racial developments of H Street, one of the city's main commercial corridors. Thompson's book offers a theoretical framework for understanding how blackness is aestheticized and deployed to organize landscapes and raise capital. Dr. Summers discussed Black in Place with Nikki Jones, Professor in the Department of African American Studies at UC Berkeley, as part of the Social Science Matrix "Authors Meet Critics" series, which features critically engaged discussions about recently published books by social scientists at UC Berkeley. Watch the video.

Recorded on February 27, 2020, this “Authors Meet Critics” featured Professor Laura Pérez — Professor of Ethnic Studies and and Chair of the Latinx Research Center at UC Berkeley — in conversation with Natalia Brizuela, Associate Professor of Modern and Contemporary Latin American Literature & Culture, UC Berkeley; and Julia Bryan-Wilson, Professor, Modern and Contemporary Art, Department of Art History, UC Berkeley. In Eros Ideologies: Writings on Art, Spirituality, and the Decolonial (Duke University Press), Professor Pérez explores the decolonial through Western and non-Western thought concerning personal and social well-being. Drawing upon Jungian, people-of-color, and spiritual psychology alongside non-Western spiritual philosophies of the interdependence of all life-forms, she writes of the decolonial as an ongoing project rooted in love as an ideology to frame respectful coexistence of social and cultural diversity. In readings of art that includes self-portraits by Frida Kahlo, Ana Mendieta, and Yreina D. Cervántez, the drawings and paintings of Chilean American artist Liliana Wilson, and Favianna Rodriguez's screen-printed images, Pérez identifies art as one of the most valuable laboratories for creating, imagining, and experiencing new forms of decolonial thought. Such art expresses what Pérez calls eros ideologies: understandings of social and natural reality that foreground the centrality of respect and care of self and others as the basis for a more democratic and responsible present and future. Employing a range of writing styles and voices—from the poetic to the scholarly—Pérez shows how art can point to more just and loving ways of being. Watch the video.

Authors Meet Critics: They Were Her Property: White Women as Slave Owners in the American South

Recorded on January 29, 2020, this "Authors Meets Critics" panel featured a discussion of They Were Her Property: White Women as Slave Owners in the American South, by Stephanie E. Jones-Rogers, Associate Professor of History at UC Berkeley. In discussing her book, Jones-Rogers engaged with two eminent colleagues: Bryan Wagner, Associate Professor in the Department of English, UC Berkeley; and Leslie Salzinger, Associate Professor of Gender and Women’s Studies, UC Berkeley. Bridging women’s history, the history of the South, and African American history, They Were Her Property makes a bold argument about the role of white women in American slavery. Jones-Rogers draws on a variety of sources to show that slave-owning women were sophisticated economic actors who directly engaged in and benefited from the South’s slave market. Watch the video.

Authors Meet Critics: In the Ruins of Neoliberalism

On December 5, 2019, the Social Science Matrix “Authors Meet Critics” series featured Professor Wendy Brown, author of In the Ruins of Neoliberalism: The Rise of Anti-Democratic Politics in the West, in dialogue with Gillian Hart, Professor Emerita, Department of Geography at UC Berkeley, and Tianna Paschel, Professor in the Departments of African American Studies and Sociology at UC Berkeley. Watch the video here.

Recorded on October 3, 2019, this "Authors Meet Critics" panel centered on The Populist Temptation: Economic Grievance and Political Reaction in the Modern Era, by Barry Eichengreen, Professor of Economics & Political Science at UC Berkeley. Eichengreen was joined by Paul Pierson, Professor of Political Science at UC Berkeley, a renowned specialist in populism, social theory, and political economy; and Brad DeLong, Professor of Economics, who served as Deputy Assistant Secretary of the Treasury for Economic Policy during the Clinton Administration and is currently a research associate of the National Bureau of Economic Research. Watch the video here.